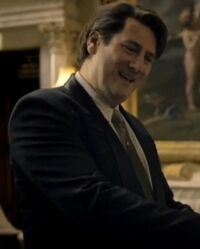 Tony Hadley MBE (born Anthony Patrick Hadley, 2 June 1960) is an English singer, actor and radio presenter best known for being the lead singer of the new wave band Spandau Ballet. In 2010, he appeared in the non-canon special Ashes to Ashes does Sport Relief as the 1983 counterpart of himself. The song "Gold" by Spandau Ballet also appeared in the episode.

In Autumn 1983 after the 1983 Ryder Cup tournament, Tony Hadley attended the Pro-Celebrity Golf tournament at the Morpine Golf club alongside Michael Parkinson and Sam Torrence. During the same day, DCI Gene Hunt and his team investigated the area for the missing Ryder Cup, which had been smuggled to the club by an unknown celebrity. While WPC Sharon Granger investigated inside the club building with DS Ray Carling, she bumped into Tony Hadley whom she immediately recognised. After being charmed by Hadley, she was left speechless. (A2A Sport Relief)

Retrieved from "https://life-on-mars.fandom.com/wiki/Tony_Hadley?oldid=11577"
Community content is available under CC-BY-SA unless otherwise noted.