Life on Mars Wiki
Register
Don't have an account?
Sign In
Advertisement
in: Ashes to Ashes characters, Inhabitants of Gene Hunt's World, 1983, 2008

The "New Arrival" is the label given to a detective who was killed or suffered severe trauma in London, 2009 and who woke up in 1983 working for DCI Gene Hunt. 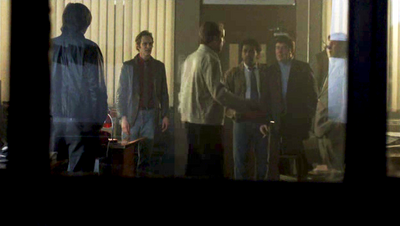 Not much is known about his past, although it is evident that his death was in the year 2009/2010 because he mentioned his Apple iPhone being "missing". However, it is known that he was a detective working in the CID office of Fenchurch East in 2009.

He woke up in 1983, just hours after DI Alex Drake, DS Ray Carling, DC Chris Skelton and WDC Shaz Granger went to "the pub". Upon awakening in London, he barged into Fenchurch East in a similar manner to Sam Tyler and demanded to know what happened to his office, but was greeted by his new DCI in his usual way (A2A Series 3: Episode 8). Presumably, he worked alongside Hunt just like his predecessors.

His name was not revealed during his appearance. However, the credits refer to him as "New Arrival".

Since Ashes to Ashes has now concluded, it is now possible for fan fiction to exist featuring Gene Hunt and this character.