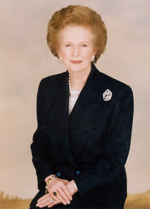 Margaret Hilda Thatcher, Baroness Thatcher (more commonly known as Margaret Thatcher) was the Prime Minister of the United Kingdom from 1979 to 1990 and leader of the Conversative Party from 1975 to 1990. She is mostly remembered for being the first female Prime Minister of the United Kingdom and for her involvement in the Falklands War in 1982. Though Prime Minister Thatcher was a character in neither Life on Mars or Ashes to Ashes, she was referenced several times throughout the five series. Supporters of Thatcher and her policies are known as Thatcherites.

Retrieved from "https://life-on-mars.fandom.com/wiki/Margaret_Thatcher?oldid=11030"
Community content is available under CC-BY-SA unless otherwise noted.