Life on Mars Wiki
Register
Don't have an account?
Sign In
Advertisement
in: Real People, Life on Mars (UK) characters 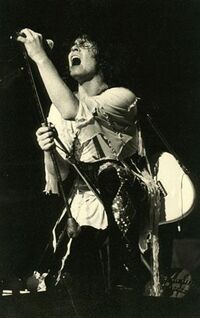 Marc Bolan (1947–1977) was the lead singer and songwriter for the 1970s glam rock band, T. Rex. He was killed just before his 30th birthday on September 16, 1977, when his girlfriend Gloria lost control of her purple Mini and collided with a tree on their way home. Ironically, Bolan never learned to drive, as he always feared he would die in a car accident.

In Series 1: Episode 4, DI Sam Tyler and DCI Gene Hunt enter the VIP lounge at Stephen Warren's club, "The Warren". Sam recognised a small number of famous people in the VIP area, including footballers Bobby Charlton and Dennis Law. Also among the patrons was Marc Bolan, whom DCI Gene Hunt had never heard of, but Tyler was amazed. While Hunt told Warren of their presence, Sam spoke to Bolan and told him he was a fan and warned him to "drive carefully, OK, especially in Minis".

Later in the same episode, to avoid using his real name in front of the 1973 counterpart of his mother, Tyler used the pseudonym "Detective Inspector Bolan". When Sam encounters his mother again in Series 1: Episode 8, he is forced to sheepishly admit his real name.