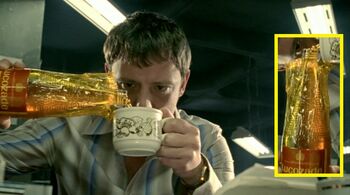 Lucozade is the brand name of several energy and sports drinks produced by company GlaxoSmithKline under the name "Lucozade".

In Life on Mars[edit | edit source]

After Sam Tyler was given LSD by Stephen Warren's "honey trap", Joni Newton, Tyler woke up handcuffed to the bed the following morning. Later that day at Stopford House police station, Tyler can be seen pouring a Lucozade drink into a mug. At the time represented in the episode, there was only the one product bearing the name. (LOM Series 1: Episode 4)

Retrieved from "https://life-on-mars.fandom.com/wiki/Lucozade?oldid=10041"
Community content is available under CC-BY-SA unless otherwise noted.