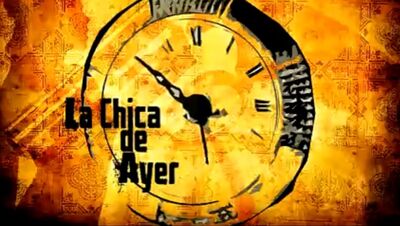 La chica de ayer (literally "The girl from yesterday" or "Yesterday Girl") is an 8 part Spanish science fiction and police procedural television series that first aired on Antena3 in 2009. It is the second remake of the British television series Life on Mars following the US remake by ABC.

In February 2008, the Spanish television network Antena 3 bought the rights from the BBC and announced it would recreate the story into 1977 post-Franco Spain. The title originiates from a 1980 Spanish song "La Chica de Ayer" by Nacha Pop (similar to "Life on Mars?" by David Bowie). First transmitted on Antenna 3, Sundays at 10pm, from 26 April to 14 June 2009.

The story revolves around Samuel Santos: a very ambitious and determined Chief Inspector of Police in Madrid in the year 2009. After being involved in a car accident, Santos awakes in 1977 Spain which was transforming following the rule of the dictator Francisco Franco. Samuel also discovers that he is now working as an Inspector under the pompous Chief Inspector Joaquín Gallardo with a team of sexist and homophobic colleagues. In a clash of old versus new, Samuel has to work out how to return home whilst working for Gallardo.

Episodes vary in length from 70 to 80 minutes, there are no on-screen episode titles.

Behind the Scenes[edit | edit source]

Mercedes Gamero, Antena3's head of acquisitions, spoke to The Times about the changes in the Spanish show: “We need to move the series forward to 1978 to recreate the characters. For example, no women were allowed in the police force under Franco. Under Franco, the police were seen as an important arm of the political regime. By 1978 there was a new openness in Spain which would have been challenging to some members of the police. There was a culture of machismo among Spanish men which has changed a lot.”

Retrieved from "https://life-on-mars.fandom.com/wiki/La_chica_de_ayer?oldid=9421"
Community content is available under CC-BY-SA unless otherwise noted.