Life on Mars Wiki
Register
Don't have an account?
Sign In
Advertisement
in: Life on Mars (UK) cast 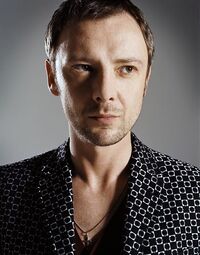 John Ronald Simm (born 10 July 1970 in Leeds, West Yorkshire) is an English actor and musician. He is best known for his roles in two BAFTA award-winning BBC Wales dramas: as DI Sam Tyler in the detective drama Life on Mars and as an incarnation of the Master in the long-running science fiction series Doctor Who. He has also appeared in many highly-acclaimed television dramas such as The Lakes, State of Play and two BAFTA award-winning serials; Clocking Off and Human Traffic.

John Simm was born in West Yorkshire but left at the age of 3 when his family moved to Lancashire. The eldest of three children, he grew up in Nelson, Lancashire; however, the family moved around a lot and lived in a variety of places around the north west, including Manchester, Colne, Burnley and Blackpool. His father, Ronald Simm, was a Mancunian musician who taught his son to play guitar. From the age of 12, Simm would join his father on stage in the working men’s clubs singing and eventually playing the guitar. He did this more and more frequently until they became a semi-professional double act, calling themselves 'Us2'. They were together for 5 years and Simm became an accomplished guitarist during this time.

In 1986 and at the age of 16, Simm went to the Blackpool and Fylde college in St Anne's for three years, and starred in Guys and Dolls and West Side Story. However, he soon decided that musical theatre didn't interest him, so he joined an amateur dramatic group and honed his skills in his spare time, playing the title roles in Billy Liar and Amadeus to great local acclaim. He then moved to London and attended the Drama Centre at the age of 19, a very strict classical theatre school where he studied the Stanislavski School of method acting. He graduated in 1992.

Independently of his acting career, throughout the 1990s, Simm was a founder member, songwriter and guitarist with the rock band Magic Alex (named after The Beatles' electrician). The group played support on two British tours with Echo and the Bunnymen. Simm also played guitar on the album Slideling, by his friend, Echo and the Bunnymen singer, Ian McCulloch (Simm also played lead guitar on a few of McCulloch's solo live shows, including one at Wembley arena as main support to Coldplay). Magic Alex split in 2005, but released one album, Dated and Sexist, which is available to buy on iTunes and eMusic.

Simm made his professional acting debut in 1992 with the role of Joby Johnson in an episode of the TV series Rumpole of the Bailey. (There had been an earlier part in the BBC drama Between the Lines where Simm was in one scene as PC Witty, but the scene was cut). There then followed a variety of roles during which time he honed his craft in front of the camera, including a psycho in The Bill, a lovestruck schoolboy in Heartbeat, and a drugged up burglar in The Locksmith. He also made two series of the BBC sitcom Men of the World, playing the lead role of Kendle Bains opposite David Threlfall. His next project saw him take the role of Gary Kingston, a deluded murderer, in Chiller.

In 1995, Simm played the troubled teenager Bill Preece in the "Best Boys" episodes of the acclaimed ITV police drama, Cracker. This is considered his breakthrough role. The series was created by Jimmy McGovern but Simm's episodes were written by Paul Abbot. (He would go on to work with both writers again, to great acclaim.) He also made his feature film debut in Boston Kickout , beating Dennis Hopper to the Best Actor award at the Valencia Film Festival.

In 1996 he made his professional stage debut in the Simon Bent play Goldhawk Road at the Bush Theatre, directed by Paul Miller.

In 1997, he starred as Danny Kavanagh in the first series of the critically acclaimed and often controversial, The Lakes, a BBC series written by Jimmy McGovern. In 1999, he starred in the second series of The Lakes as well as appearing as Jip in the award-winning cult clubbing film Human Traffic and Michael Winterbottom's acclaimed Wonderland.

In 2000, he starred in the opening episode of the BBC drama Clocking Off written by Paul Abbott, with whom he would later work on the multi award-winning political thriller series State of Play, playing investigative journalist Cal McCaffrey. (Both these series also feature Philip Glenister, with whom he would later star in Life on Mars.) He also played the lead role of loan shark John Parlour in Tony Marchant's Never Never for Channel 4.

In 2002, Simm featured in another Michael Winterbottom film, 24 Hour Party People, as enigmatic New Order frontman Bernard Sumner. At a live concert in Finsbury Park the same year, Simm sang the Joy Division song "Digital" onstage with New Order. (Years later, he was chosen by the band to induct Joy Division/New Order into the Rock and Roll Hall of Fame). It was also this year that he played Raskolnikov in the BBC adaptation of Crime and Punishment, adapted by Tony Marchant. Marchant also wrote The Knight's Tale, one of a series of modern reworkings of The Canterbury Tales, in which Simm played Ace opposite Chiwetel Ejiofor and Keeley Hawes . Later that year he starred opposite Christina Ricci and John Hurt in the film Miranda.

In 2004 he played the researcher and charity investigator Daniel Appleton in the BAFTA award-winning Channel 4 drama Sex Traffic. This hard-hitting two-parter followed the plight of two young Moldovan sisters sold into sexual slavery.

After re-uniting with Shaun Parkes in Howard Davies' production of Joe Penhall's Blue/Orange, in which he played Dr. Bruce Flaherty opposite Brian Cox, Simm starred as Detective Inspector Sam Tyler in the 2006 BBC series Life on Mars in which he played a police officer apparently sent back in time to 1973. The show won the Pioneer Audience Award for Best Programme at the 2007 BAFTA TV Awards, Simm was nominated but lost out on the award for Best Actor. He decided to leave after series two (2007), stating that he felt he had taken the role of Sam Tyler as far as he could. (The BBC decided to commission a spin off series, Ashes to Ashes, featuring Philip Glenister's character, DCI Gene Hunt.)

His next project, in March 2007, was The Yellow House for Channel 4, a biographical drama produced by talkbackTHAMES, based on the book of the same name by Martin Gayford about the turbulent relationship of artists Vincent van Gogh (Simm) and Paul Gauguin (John Lynch).

Simm also returned to the theatre as the title character in Paul Miller's acclaimed Bush Theatre staging of Simon Bent's version of Elling, a comedy about two men just out of mental hospital adjusting to 'normal life' and each other. Following positive press reviews and an extended, sell-out run, the production was transferred to the Trafalgar Studios 1 in July 2007.

In 2007, Simm was chosen by Russell T. Davies to play the Master, the nemesis of The Doctor in the long-running BBC series Doctor Who. He appeared in the final three episodes of series three: "Utopia", "The Sound of Drums" and "Last of the Time Lords".

He was involved in an ongoing project with director Michael Winterbottom called Seven Days, which was filmed in real time over five years and finished around 2010. They filmed for a few weeks every year and it co-stars Shirley Henderson.

Simm's next project was The Devil's Whore, a three-part English Civil War epic for Channel 4, written by Peter Flannery. He plays the role of Edward Sexby. Shot on location in South Africa, the drama also features Dominic West as Oliver Cromwell and rising star Andrea Riseborough in the title role, and released in 2008. He also starred in Skellig, alongside Tim Roth and Kelly Macdonald, which was first broadcast on Sky1 on April 12, 2009.

In March 2021, it was revealed that he was in talks with Matthew Graham for a prospective third series of Life on Mars.

He is a passionate supporter of Manchester United.[1] and he is a self confessed "Beatles nut".