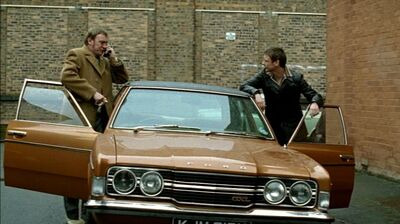 Generally, the Cortina was Ford's gem. When the First Generation came along in 1962 It changed Ford's humble brand image, it was an affordable luxury car that was economical,cheap to run and cheap to build in the U.K. it was sold for 20 strong years with five different generations until 1982 when it was replaced by Uwe Bahnsen's radical, unpopular Sierra.

In 1973, a Ford Cortina Mark III GXL was owned by Gene Hunt, which he regularly used to travel around Manchester. In 1980, his Cortina was replaced by the Audi Quattro when he and his team transferred to the Fenchurch East division of the Metropolitan Police.

The car had a certain emotional value to Hunt, as emphasised by his threat to a group of youngsters to "come round your house and break all your toys" if anything happened to it while he was away. Whatever his own state of health, he was not inclined to let anyone else drive the car.

Behind the Scenes[edit | edit source]

The following anachronisms were revealed in an episode of Top Gear during an interview with Philip Glenister:

In aid of Comic Relief, the Cortina used in the two series of Life on Mars was sold on eBay for £10,000.

Retrieved from "https://life-on-mars.fandom.com/wiki/Ford_Cortina?oldid=11257"
Community content is available under CC-BY-SA unless otherwise noted.