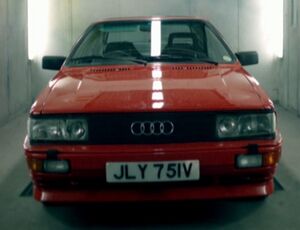 The Audi Quattro was a road and rally car developed by German car manufacturer Audi, which was produced from 1980 to 1991. best known as the fire spitting rally car from the 1980's that completely re -wrote the rule-book for rally cars to come and inspired future Audi models. In 1980, when Hunt and his team transferred to Fenchurch East in London, he replaced his Ford Cortina with an Audi Quattro which he was more careful towards compared to his Cortina.

The Quattro was destroyed whilst protecting Gene Hunt and Alex Drake against oncoming gunfire from Dutch gangsters. Before the new arrival appeared in CID, Hunt was reading a catalogue for the new Mercedes-Benz 190D. (A2A Series 3: Episode 8)

The phrase "Fire up the Quattro!" acquired a certain cult status in Britain during the run of Ashes to Ashes, and still has a nostalgic cachet.

The Audi Quattro appears as a findable car in the video game Forza Horizons 4, where it is described as having a previous owner who got into a lot of shootouts