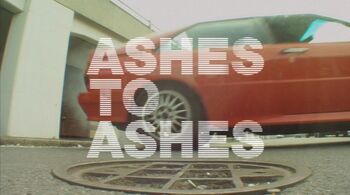 Ashes to Ashes is a British television drama series, which serves as a sequel to the 2006 series Life on Mars. It is a Kudos Film & Television production, for the BBC, which was broadcast on BBC One. It premiered on 7 February 2008 at 9:00 PM GMT. Matthew Graham stated that the programme could potentially run to three series, which it did.[1] Filming for a second series started in Summer 2008, and was broadcast in April 2009, while Series 3, which was aired in April 2010, completed the show.[2]

Ashes to Ashes features DCI Gene Hunt (Philip Glenister) from Life on Mars. He is joined by an experienced female detective, and trained psychologist from the 21st century, DI Alex Drake (Keeley Hawes), who wakes up in 1981 after being shot in 2008. She concludes that she is either a second away from life, or a second away from death, because of the detailed notes she has studied from DI Sam Tyler, when he found himself back in time in 1973 after a car accident. Also reappearing are DC Chris Skelton (Marshall Lancaster) and DS Ray Carling (Dean Andrews). All have transferred to the Metropolitan Police in London, and Chris and Ray remain loyal to Gene. Augmenting the team is WPC Sharon 'Shaz' Granger, (Montserrat Lombard).

Continuity with Life on Mars[]

As with the parent series, the show's name comes from a David Bowie song of the era in which it is set, in this case the 1980 single "Ashes to Ashes".

It is established that DI Alex Drake, a trained police psychologist, has been studying the suicide of DCI Sam Tyler and is familiar with the detailed description he recorded of his experiences of life in 1973 (whilst he was actually in a coma in 2006).

When Drake herself is shot during a hostage situation and finds herself transported back to 1981, it is her familiarity with Tyler's world that leads her to deduce she is "hallucinating". She also draws upon her knowledge of Tyler's experiences in 1973 to inform her decisions on how to act in the world of 1981. For example, she spends time finding and tuning a powerful radio so that she can receive information from the "real world", because this is how Tyler received information about the progression of his coma in his world of 1973. Alex does eventually receive messages from Rainbow characters Zippy and George, a handheld radio and the television set.

Drake is also stalked by a sinister clown in a Pierrot costume which resembles David Bowie's appearance in the "Ashes to Ashes" music video. The clown appears to echo the role of the Test Card F girl in Life on Mars.

Drake learns from DS Ray Carling that Tyler returned to Manchester in 1973 and spent seven years serving faithfully alongside Gene Hunt. In 1980 he drove his car into a river during a car chase and is presumed dead, though the body was never found.

A newspaper clipping paying posthumous tribute to Tyler's achievements hangs in Hunt's office. Hunt subsequently transferred to the Metropolitan Police, taking Carling and Skelton with him.

Based on overnight returns, The Guardian reported that audience figures for the 7 February 2008 broadcast of the first episode, in a 9:00 pm slot on the flagship channel, BBC One, were 7 million: about 29% of viewers. The figure was "in line with the final episode of Life on Mars in April last year, though well up on the earlier show's second series debut of 5.7 million two months earlier," but The Guardian noted "the heavy publicity blitz this week for Ashes to Ashes" as a factor in its success against the opposition.[3] Ashes to Ashes will be returning to our screens in February 2009.

Critical reception to the first episode of the series was mixed,[4] with positive reviews from The Daily Telegraph,[5] The Herald[6] The Spectator,[7] and the New Statesman[8] and negative reviews from The Times,[9] The Sunday Times," Newsnight Review,[10] The Guardian and The Observer, which criticized the episode's direction, structure and tone (although it did praise the costumes and art direction). The national free sheet, Metro, gave the episode four stars as "a vote of faith" on what it described as "a dodgy start",

The Guardian reported on 15 February 2008 that, with 6.1 million viewers and a 25% audience share, the ratings for the second episode, shown on 14 February, were down by almost one million on the first, comparing overnight returns. It still did well against the Lynda La Plante police procedural Trial & Retribution, which fell to a series low on ITV.[11]

After press complaints about the quality of Keeley Hawes' performance, Philip Glenister defended his co-star, stating, "It's a hellishly difficult thing to come into and I've seen how hard she works and how brilliant she is. To all those detractors, they're just plain wrong."[13]

After Episode 5, The Daily Telegraph stated that with this episode "Ashes to Ashes stepped out of the shadow of Life on Mars."

After the final episode The Daily Mirror stated that although one or two episodes were lacking, in the end it was a satisfying finish to a series which had a lot to live up to and deserves a second series.

The soundtrack features contemporary songs by British groups of the period such as punk period survivors The Clash and The Stranglers, New Romantics such as Duran Duran and Ultravox, synthpop such as Jon & Vangelis and OMD, as well as the later period Roxy Music and The Passions' sole hit single, "I'm in Love with a German Film Star", from 1981. A scene in the second episode, "The Happy Day", set at The Blitz features Steve Strange playing himself performing "Fade to Grey" by Visage.The last episode in Season 1 ends with "Take The Long Way Home" from Supertramp's "Breakfast In America" 1979 album.

From 2008 to 2010, three soundtrack albums were released during the period the programme was aired:

As with the parent series, there are anachronisms. At least one, however, is intentional: the Audi Quattro was not available in right hand drive in the United Kingdom in 1981, only in left hand drive. The car shown in the TV series is the 1983 model, with slight changes to the headlights and other features. Philip Glenister admitted that the production was aware of this but said, "But who cares? It's a cool car." He has jokingly speculated that Hunt probably got it as a dodgy German import.