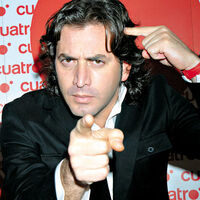 Antonio Garrido (born August 29, 1971) is a Spanish actor and television presenter who starred as Joaquín "Quin" Gallardo in the single season Spanish remake of Life on Mars, La chica de ayer. He is currently the host of the Spanish version of Who Wants to Be a Millionaire?, which is also broadcast on Antena 3.

Retrieved from "https://life-on-mars.fandom.com/wiki/Antonio_Garrido?oldid=11064"
Community content is available under CC-BY-SA unless otherwise noted.