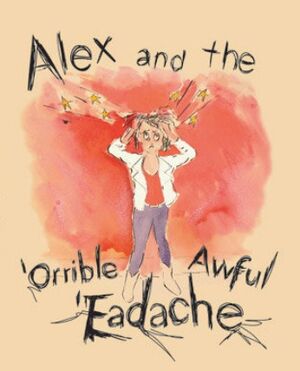 Alex and the 'Orrible Awful 'Eadache was an imaginary children's book read by a hallucination of DCI Gene Hunt on the children's television programme Jackanory in 1982. The book was about Alex Drake, specifically her trauma in 2008. (A2A Series 2: Episode 8)

Description (from the blurb)[edit | edit source]

Once upon a time there was a lovely little girl called Alex Drake ... and Alex Drake loved brains...

Alex and the 'Orrible Awful 'Eadache is a delightful children's book about a little girl called Alex whose favourite thing in the world is brains. When her own goes a bit wrong, Alex has to work out how to fix it. But as the 'Orrible Awful 'Eadache gets wrong, little Alex can't think thoughts and she has to rely on her friends to help her. And her friends aren't necessarily the people she thought they were. In fact, Alex may not be who she thinks she is. Come and join Alex as she goes on a fantastic adventure and as if her head blows up!

Alex Drake loved brains. She loved the way they could control your arms and legs, made you hungry and thirsty. She loved that these balls of wrinkly sponge could be filled with all our dreams, hopes and fears.

Every since she was a kid, Alex wanted to study brains. When Alex grew up she became a policewoman... or 'plonk' as her friends cheerfully called her. But she never gave up her love of brains, so she studied something called psychiatry. Now this wouldn't help her become a better plonk, but in her own little girly way, it made her very happy.

And then one day, Alex met Pete. Alex and Pete fell in love and they had a daughter: Molly. ...And Alex was of course a brillaint mum... until the 'eadache... The 'Orrible, Awful 'Eadache.

It was horrible. It was awful...

Alex and her fascination with brains.

Alex and her surgeon Samuel Gerrard.

Alex and Molly celebrate her birthday.

Molly waits for Alex to wake up.

Alex is shot by Gene Hunt.
Add a photo to this gallery
Retrieved from "https://life-on-mars.fandom.com/wiki/Alex_and_the_%27Orrible_Awful_%27Eadache?oldid=11012"
Community content is available under CC-BY-SA unless otherwise noted.